Bees: Their Amazing World, and the Role they Play in our Forests

Honey bees. They have captured the hearts and minds of many Americans in recent years as their population decline has begun to make headlines. So much so, that since 2009, their contribution to both ecosystems and economies have been celebrated on the third Saturday of August—National Honey Bee Day.

And it’s no wonder the organizers of National Honey Bee Day take this opportunity to highlight the many positive aspects of honey bees. Honey—made by bees from flower nectar—is an obvious benefit. It tastes good, and it’s good for you. How many foods can say that?

But while honey bees tend to get all the glory, there are about 20,000 different species of pollinators who play a vital role in their respective ecosystems, including 4,000 types of bees native to the United States. In this post we’ll look at the role bees play in forest health, and how you can protect bee habitat on your land.

As you’ve probably guessed, bees play a more important role than satisfying our sweet tooth. They pollinate flowering plants, making them very important to the reproduction of native plants, as well as agriculture crops.

While the wind disperses pollen from some plants, animal species play a pivotal role in the pollination of many others. Pollination of flowering plants is accomplished by honey bees, as well as some others such as bumble bees, moths, butterflies, and even bats in some parts of the world. Nectar feeders also disperse pollen to the flowers of others, or even the same plant.

Honey bees also pollinate many of our crops. Just as I migrate north to New England each summer, so do the bee hives, brought to pollinate cranberries in the bogs.

Bees have a very regimented caste system. Every bee has a role, and knows its place. Larvae are designated at birth as to which caste they belong. The queen bee—is just that. She is the reproductive machine of the colony. Her destiny is to reproduce, and she does it well.

Drones are male bees, one of whom mates with the queen. With the onset of cold weather, drones are booted out of the colony. It may sound calloused, but such it is with colony efficiency.

The bees we are most familiar with, those buzzing around, are the workers. These females  gather the nectar and pollen from flowers, and can forage miles from the hive. Hives can be a natural structure such as a tree cavity or rocky outcrop, or, an artificial structure, as is the case with domesticated honey bees. 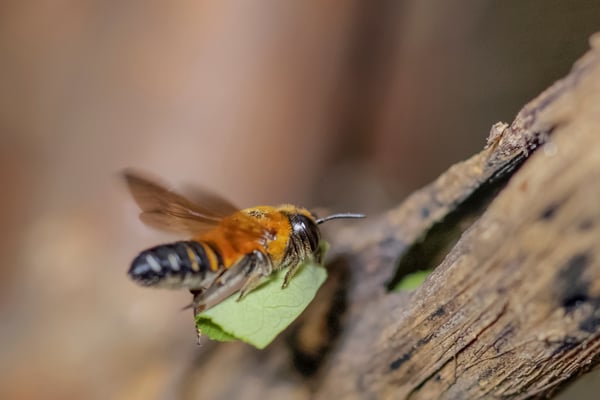 Trouble in the Bee World

Sadly, bee populations have declined in recent years. Estimates and causes vary, but the lowest are substantial.

While the causes are varied and interconnected, land and habitat change is one likely contributor to this trend. In earlier times there was widespread plant diversity with variable plant pollen—and therefore protein—sources. The American Bee Journal points to the role of plant diversity in bee nutrition in the population decline, as pollen from some plants have lower levels of protein than others.

Some ecosystems nowadays are much simpler, with monocultures dominating in places, especially where honey bees are deployed for pollination. With these monocultures there may be limited amino acids in proteins. Also, in diverse habitats the many species of flowering plants flower, and are available to bees, at different times. Not so with a monoculture. In the short term, this isn’t much of a problem. But long-term, weakened bee physiology could put populations at risk to other factors. For example, two species of mites also play a role in bee demise. One infects the trachea of adult bees, the other the larvae.

Another factor widely thought to affect bee populations is widespread pesticide use. Pesticides are mostly non-selective, may be long lived, and can target insect populations. Also, herbicides are employed to kill plants that are undesirable to humans, some of which are desirable to bees.

What you can do for the Bees on Your Forest Land

DO provide a diverse array of flowering plants. Consider those that flower at different times of year. Verify and favor the ones the bees do.

DO provide young stands. Early successional tree stands with diverse grass-forb stage vegetation are well suited for pollinators. In other words, lots of sunlight and flowers! Some examples of plant species pollinated by bees include: Croton, Eupatorium, smartweeds, sunflowers, and goldenrod. So pollinators suggest those bright yellow fall goldenrod flowers are not the cause of our allergies!

In the shrub stage, species that flower and therefore attract pollinators include: greenbriars, honeysuckle, trumpet creeper, Baccharis, and privet.

DO allow sunlight into stands. As forest stands develop, become dense, and crowns close, there is much less flowering and as a result, fewer pollinators. Stand manipulations, such as thinning, allow more intra-stand sunlight, flowering, and pollinators.

DO allow your forest to mature. Mature stands are also well suited for bees. Especially stands that include a variety of species, as well as openings or gaps. Mature forests can provide shade and protection from extreme weather for hives.

So, the next time you see a busy bee, think about their fascinating world, and the critical role they play in ours.

About the author: Dr. James G. Dickson is an award-winning author, researcher, wildlife biologist, and professor. He and his colleagues have produced comprehensive books including: Wildlife of Southern Forests: Biology and Management, and The Wild Turkey: Biology and Management, referred to as “the turkey bible.” He is Scientist Emeritus, USDA Forest Service, Southern Research Station.

*This post was written by guest blogger. The views within it do not necessarily represent those of WoodsCamp Technologies or the American Forest Foundation.